It is not a new insight to say that Alien is, essentially, a haunted house movie in space. What I was struck by, watching it this time, is that much of the first half of the movie is about working in a crappy workplace… in space. Alien came out only two years after Star Wars, and in fact was likely green-lit after its screenwriter, Dan O’Bannon, shopped a version of the script for years, pretty much solely because, in O’Bannon’s words, “they wanted to make another Star Wars, and Alien was the only science fiction script on their desk.” And while Alien was influenced by Star Wars in the sense that it depicts a future that is, if anything, dirtier rather than cleaner than today (this is the wettest, drippiest spaceship I’ve seen in my life), it also forges an extremely different path. While Star Wars’ characters hop right out of the old serials that influenced George Lucas, Alien’s characters were described by director Ridley Scott as “space truckers.” They are everyday schmoes, portrayed by extremely naturalistic performances.

The story unfolds slowly, which is on purpose. The dread builds up for what feels like a very long time before anything actually happens, and some of the early sequences are straight out of Lovecraft. The crew gets a distress signal (or a warning?) repeating from an unknown planet. They investigate. They find a giant spaceship with a huge dead alien life form on it. John Hurt’s character eventually finds a pool full of “leathery eggs,” one of which hatches a bizarro creature that latches onto his face. He is brought back onto the ship, where we figure out the creature has acid for blood. It seemingly dies suddenly, and Hurt seems fine. The crew celebrates with a final meal before heading back into cryogenic sleep. But then things get much, much worse very quickly.

That scene of the alien suddenly bursting out of Hurt’s chest is iconic in movie history. Legend has it that the reactions of the actors playing the crew were genuine, as they hadn’t known what was about to happen. This is only sort of true: they knew the scene involved an alien bursting out of Hurt’s chest. What they didn’t know about was the fountains of spurting blood that would be involved, one of which sprayed all over Veronica Cartwright’s face, leading to her genuinely horrified and shocked reaction. It is one of the great shocks in movie history. It is also the big turning point in the movie. From that point on, the crew are basically in a slasher movie, though they don’t know it.

One other piece of lore about Alien, which is true, is that the original screenplay did not give genders to any of the characters, giving them only gender-neutral last names. That is how Sigourney Weaver, in her first leading role, ended up cast in one of the prototypical “strong female action movie lead” roles, through “gender-blind” casting. In fact, Cartwright appeared on set thinking she would be playing Ripley, before being told she was being shifted over to play the navigator Lambert. Coming into this movie, Cartwright was better known than Weaver (she had just starred in Invasion of the Body Snatchers), but it turned Weaver into a big star.

O’Bannon had always assumed he would direct the movie himself, but faced with a big budget and crazy special effects for the time, he handed over the reins to a young director named Ridley Scott, who was on his second feature film. While the screenplay may have had the idea for a horror movie in space, it was Scott who brought the design sense that makes the movie truly memorable. He did everything he could to give some scenes a sense of awe, in the old sense, when they needed it, and pushed the studio to pay for a huge, full scale set for one scene showing the “space jockey” alien… this turns out to be absolutely crucial to the feel of the movie. It was Scott who brought in the Swiss artist H.R. Giger to design the aliens and ships involved in the movie. The studio initially pushed back that Giger’s alien design was “too horrifying,” but eventually relented. It is indeed horrifying. Audiences at test screenings were repeatedly reported to have run for the exits, or to have sat further from the screen on purpose. If you went into Alien in a movie theater, not knowing what you were in for… oh boy.

Scott does show the alien to us, but we still don’t know what to expect, because its appearance changes every time we see it as it grows and evolves. It is a unique take on the old Jaws trick (a movie only four years old at the time) of not actually showing the monster until the third act of the movie. But it is not just a haunted house movie, it is also a body horror movie. It has far more phallic and vaginal imagery than most movies with actual nudity. Hurt’s character is basically raped, impregnated, and then gives violent, bloody birth to a walking vagina with teeth. O’Bannon himself has been very open that this imagery was intentional, stating “I wanted to attack the audience with sex. I wanted every man in the audience to cross his legs.” As he points out, this is a movie that turns the tables to some degree, with the male characters bearing the brunt of the sexual terror. 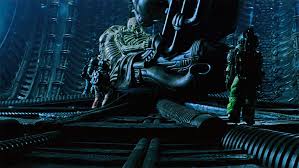 There are exactly seven human characters in this movie, and they are all portrayed excellently by strong actors. Tom Skerritt plays the captain, Yaphet Kotto and Harry Dean Stanton play two working stiffs down in engineering. And Shakespearean stage actor Ian Holm makes a big impression as the technocratic, reserved science officer, Ash. They talk over each other, they eat, they drink, they worry about how much they’ll get paid. The atmosphere on the ship is so workaday that they even have a cat, Jones, who multiple characters spend a great deal of screen time trying to track down at various points in the movie (sometimes just prior to being eaten). The cat is such a driver of horror movie silliness that I think if I learned one thing from Alien, it’s not to take your cat to space, even if you have a future cat carrier like Ripley does for Jones later in this movie.

Alien is, in my opinion, one of the biggest omissions from the “greatest movies” lists we sometimes feature on this blog. Though its characters spend a good amount of time staring at tiny screens that were already out of date by the time this movie came out (Scott wanted the ship to seem “retrofitted with old, cheap technology), it still feels fresh and original. Many imitators have come along since, including several Alien sequels, but none have matched the sheer dread of the original, nor the workaday, grounded feel in the middle of the Lovecraftian horror. The period of time where this movie could have been made, with the level of effects and budget that it has, without being forced into faster pacing, into more action, was not very long. All one has to do is look at the direct sequel Aliens, directed by James Cameron, which has many virtues but is far more an action movie than the original, to see that the studio had already moved on from this. But in 1979, Alien could still be made, and it was, and it’s pretty great.