I get the sense that these days it’s not particularly cool to include Gladiator on the list of modern day classic movies. Perhaps it is the fact that it launched a briefly-renewed craze for sword-and-sandals epics that included a couple of other OK movies but mostly a fleet of expensive-but-forgettable silliness. Director Ridley Scott would himself return to this area with the Crusades-set Kingdom of Heaven and a long, dour version of Robin Hood, revamped to be more like Gladiator, which were both seen as major failures at their release. That Robin Hood movie also starred Russell Crowe, whose reputation and career took something of a hit after a series of scandals, including his arrest in New York for throwing a phone at a hotel clerk’s face. Or it could be that the movie is only historical fiction by a very loose definition (there are people with the same names as historical figures, but that’s about it), or the fact that, as far as I can tell, there is exactly one female speaking part in the entire two and a half hour movie. It could also be that the movie insists on taking itself utterly seriously from beginning to end. I’m not sure there’s a joke in the thing. Roger Ebert wrote in his two star review at the time that the script “mistakes depression for having a personality,” which I would say is probably fair.

The thing is, I really love this movie, and it’s not as if I’m the only one who came to that conclusion. It won the Best Picture Oscar, along with a Best Actor award for Crowe, and was one of the top-grossing movies of the year at the box office. I think it might have come along at the right time for me, when I was in high school and really getting into “adult movies” for the first time. The opening battle scene is pretty much a cliche now, but it only became so because of this movie and others like it, and it was the first battle like that I personally had ever seen in a movie. When I watch Gladiator now, I can almost talk along with much of the dialogue. It feels carved in stone, the same way I feel about the dialogue in other movies I’ve watched over and over like Star Wars or The Lord of the Rings.

Another reason for my feelings about this movie remains the soundtrack, which I had on CD and listened to over and over. Composed by Hans Zimmer and Lisa Gerrard, it felt very different at the time (a mix of majestic classical just this side of Gustav Holst and exotic world music wailing) but was highly influential. A few years later, in a song parodying the movie business, Barenaked Ladies sang the line, “Vaguely Celtic music fills the air.” What they’re talking about is the way that, after Gladiator, pretty much every vaguely action-y movie’s score started sounding like this one, though in my opinion very few were as good. I hadn’t listened to the soundtrack in years, but every detail came flooding back watching, and listening, to this movie.

Since Gladiator, fiction and non-fiction set in the period of the Roman Empire has multiplied, to the point that some scholars have referred to this phenomenon as “The Gladiator Effect.” At the time of the movie’s production, however, it had been decades since a movie on the subject had been produced on this scale, to the point that Scott, or maybe his studio, felt the need to include an opening crawl basically telling us what the Roman Empire was. The movie tells the story of the fictional general Maximus (Russell Crowe), who after a major victory the Emperor Marcus Aurelius (the great Richard Harris) tries to appoint as his successor, for the purpose of returning Rome to its former status as a Republic. This greatly perturbs the Emperor’s son, Commodus (Joaquin Phoenix), who kills his father and tries to have Maximus executed and his family killed. Maximus escapes, but cannot save his family, and ends up sold as a slave in Northern Africa.

Maximus is bought by a gladiator trainer (Oliver Reed), and gradually makes his way back to the Colosseum in Rome by virtue of killing a bunch of dudes in the arena. You may recall the title character’s refusal to fight in Spartacus (a movie which definitely numbers among this movie’s primary influences), and Crowe gets exactly one scene like that here, before giving in and wholesale slaughtering all his opponents. His body count of random, masked opponents who, as far as we know, didn’t do anything wrong, is not small in this movie. In Rome, Maximus becomes involved in a plot to overthrow Commodus, led by Commodus’ sister (and Maximus possible former lover, the movie is extremely vague on this), Lucilla (Connie Nielsen) and Senator Gracchus (Derek Jacobi). This plot ends up failing spectacularly, and Maximus ends up wounded and fighting Commodus to the death in the Colosseum. Maximus, of course, wins, and announces that he’s giving Rome back to the Senate before keeling over and seeing his family in the afterlife.

Gladiator married state-of-the-art advances in special effects with a very throwback Hollywood story. CGI famously becomes dated very quickly in movies, but I would argue that this movie integrates it seamlessly (particularly in the Colosseum scenes, where only the very lowest tier of the stadium was actually built) and that the graphic still hold up today. The effects ended up carrying more of the load then originally intended after veteran English actor Oliver Reed died of a heart attack in the middle of filming in Malta. Reed was well known as an alcoholic of the highest degree, and reportedly had, on the day of his death, drank “eight pints of German lager, a dozen shots of rum, half a bottle of whiskey and a few shots of Hennessy cognac” during a drinking contest with British sailors on shore leave. The movie’s effects wizards then completed Reed’s performance in the movie by compositing footage of him gathered from outtakes onto the face of a stand-in, pioneering a technique that’s now used all the time. The difference being that here it actually works, and I honestly have no idea which of Reed’s scenes were actually him and which were created using computer graphics. 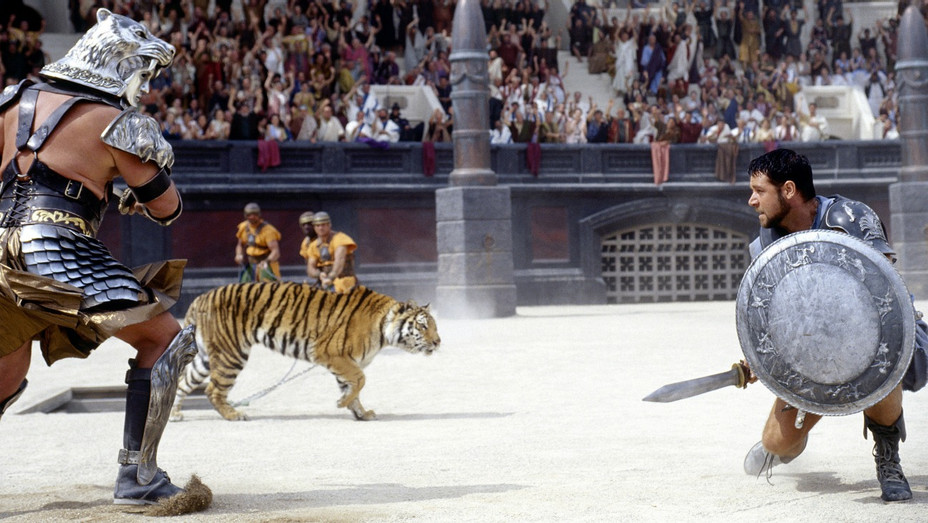 This movie was also the first time I’d seen Joaquin Phoenix in a movie, and it’s interesting, looking back, how different his performance here is than he would be in, say, The Master or Joker. He is playing a whiny aristocrat, who keeps shouting, with tears in his voice, about how all he wants is for everyone to love him. In the scenes where he actually is menacing, it is a snake-like menace. Commodus is in way over his head, being Emperor, but doesn’t realize it. It was also the first time I’d seen Djimon Hounsou, a Beninese actor who had risen to prominence a few years earlier in Steven Spielberg’s Amistad. He plays Maximus’ African gladiator friend, and doesn’t get huge amounts to do in the movie, though it did make Hounsou famous enough to keep him working in small and medium-sized roles ever since, and I’d say he makes every movie he’s in more interesting.

Crowe’s performance itself is hard to separate from the actor himself. He was in the midst of a stretch, starting with L.A. Confidential in 1997, that saw him appear in five movies that received Best Picture nominations in six years, including the next year’s winner, A Beautiful Mind, as well. Crowe was born in New Zealand but grew up in Australia, before just around this time very suddenly becoming one of the most successful and acclaimed actors of his area. His role as Maximus has many memorable lines (“Are you not entertained?!?”) that would cement him, more than any of his other roles, into the pop culture consciousness. Some of them were apparently the product of Crowe himself, as the script was not finished at the time shooting started and he took this as a license to enterprise. On the other hand, he had to be talked into delivering many of the lines that are actually in the script, presaging a reputation for being difficult to work with that would take hold over the years.

Gladiator remains monolithic in my own imagination, and I think the imaginations of many others as well. If its success now seems, in retrospect, almost accidental, then that is all the more to its credit, perhaps. I should also address, I think, the movie’s complete uninterest in historical accuracy. Marcus Aurelius, Commodus, and Lutetia are all real historical figures, and there are a handful of real historical people who likely inspired bits and pieces of Maximus’ character. But those people did absolutely none of the things they are said to have done here, and, perhaps more importantly, Rome of course never went back to being a Republic once the Empire was installed. It is this last that makes the whole thing to me play more like fantasy, or at least alternate history, than an attempt to tell history accurately. I tend not to be a major stickler on these things anyway. I have history books to be history, and movies to be movies. It probably helps that Commodus died a couple of thousand years ago, and isn’t going to get mad about Joaquin Phoenix playing him as whiny and evil.