I was thinking about it this evening and I think that Crouching Tiger, Hidden Dragon may have been the first movie with subtitles I ever saw, certainly in an actual theater. I remember having to talk my Dad into it, not because he thought there would be anything bad in it, but because he wasn’t sure he felt like reading for two hours. That’s how I remember it, anyway. And I don’t think I’ve seen it since, but it won our reader poll to join our Y2K Virtual Film Festival, and so my SO and I sat down to watch it again last night, when I really needed a good time. And I’ll say that, overall, such a time was had.

This was a completely unique movie at the time it came out, though there was a series of direct successors, and it set a precedent for widespread distribution of a foreign-language movie in general cineplexes in the US that probably led directly to the future successes of movies like Roma and Parasite. If the action feels slightly less breathtaking today than it did at the time (I vividly remember sitting in a theater going WHAT IS THIS?) that’s only because lots of people saw this movie and say “I want to do that.” Certainly we wouldn’t have Avatar: The Last Airbender, in the same form at least, without this movie, and that’s lots of people’s favorite thing of anything. 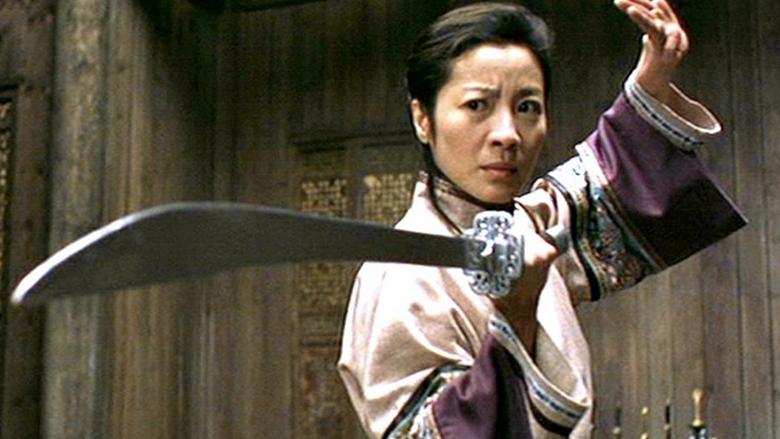 Crouching Tiger, Hidden Dragon was the project of Taiwanese-born director Ang Lee, who had gone to school in the US and had established himself with English-language hits like Sense & Sensibility and The Ice Storm. He got financing from companies from China, Taiwan, Hong Kong, and the US, and brought in stars from across Asia. The movie is so international that apparently if you actually are a native speaker of Mandarin, tha language used in the movie, it’s a very weird experience. Chow Yun-Fat is from Hong-Kong and originally spoke Cantonese, Michelle Yeoh is Malaysian, and Chang Chun is Taiwanese and I’m told speaks Mandarin with a Taiwanese accent. So everyone’s trying to hide their original accent the whole time, to varying degrees of success.

But to a teenager in America in 2000, what I mostly remembered was the way the characters seemed to float their way through this version of China, over rooftops and walls, seeming weightless even in the heights of thin, whispering trees. I had never seen anything like it. Of course, this movie did not invent what is known in China as the Wuxia genre, literally meaning “martial heroes,” though it can perhaps be credited with popularizing it in the West to a degree it had not been before. Nor did it invent the idea that Wuxia heroes could run up walls with ease. However, the movie takes this idea and depicts it on a Hollywood scale, with a level of budget and location shooting unavailable to any previous entry in the genre. It all seems incredibly sure-handed, considering, though that perhaps belies what was going on behind the scenes. Ang Lee spent 8 months at the start of shooting just on the half-hour or so of the movie set out in the Chinese desert, driving himself and his actors nuts in the dust and heat.

Crouching Tiger, Hidden Dragon is set in a misty, nebulous Chinese past. The movie is non-specific as to its setting except to say that it’s during the Qing dynasty, which for those who may not be aware lasted from 1644 to 1911, so a wide swath there. Its plot may occasionally be opaque to Western viewers, especially those who occasionally look down at their phones, but I actually found it really interesting and moving. Chow Yun-Fat and Michelle Yeoh play middle-aged, experienced warriors, who have always loved each other but never said anything. He is trying to retire and she is running a “security company,” so he sends her to take his “Green Destiny Sword” to a friend in Beijing. Soon, however, a masked thief steals the sword with, mysteriously, the same martial arts powers that the two warriors have.

I’ll leave at least some of the spoilers out, as the movie treats them as reveals, though I don’t know if they’re supposed to be surprises or not. But this is the breakthrough role of young Chinese actress Zhang Ziyi, who went on to star in some of this movies most erstwhile imitators, such as House of the Flying Daggers, and become one of China’s most bankable domestic stars. In the end, other than its incredible visuals, the movie is about her character, and her character’s relationship with the older couple. She is chafing against the gender roles of Chinese society. She has all this power but no training, and is ruled by youthful fury rather than the cool, calculating detachment personified by Chow and Yeoh. She could easily turn into the bad guy in this movie, sort of a female, Chinese Anakin Skywalker, but this is a much better movie than that. Chow and Yeoh’s characters never completely lose sympathy for her, nor she for them, even when she’s completely destroying a tavern full of outlaws and everyone in it. You know, dumb teenager stuff.

Crouching Tiger, Hidden Dragon was hardly the first foreign-language film to become a big hit in the American market, though it may have made a bigger impact in the multiplex zeitgeist than any before it. It received ten Oscar nominations, a record for a non-English movie (this record was tied by Roma in 2018), and was a major worldwide financial success. In assessing its impact, I’d probably start with its status as an outside force pushing back on Hollywood. It is an early product of cultural globalization. In the past, everyone knew what a foreign movie was in the US. It was Fellini, Bergman, or Godard. It was not everyone’s cup of tea, and it was never going to be a huge blockbuster. But this is a big old high-budget action movie, by and starring Asian people. For the first time maybe ever, if Hollywood wasn’t going to cast Chow Yun-Fat, Michelle Yeoh, or Zhang Ziyi as the star of their big action movie, it didn’t mean they weren’t going to make a huge action movie that people in the US would then go and see. And that can’t be anything but a good thing.

Thank you to everyone who has travelled with us to the simpler time of the year 2000 in our Y2K Virtual Film Festival this week and who voted in our poll. Tomorrow, we’ll be back to our general rotation of classic movies. We’ll see you then!