We’ve done a few movies on here that turned out to be, shall we say, not my cup of tea. I don’t think any have been quite so aggressively not my cup of tea as this one. The first feature from writer/director Malcolm D. Lee (cousin of Spike Lee, who financed and produced this movie), it feels, as many first features unfortunately do, like little more than a visual version of a script. A series of able actors can’t quite translate the lines into something beyond what was on the page. And those lines feel like they were gone over a few too many times. At one point, Taye Diggs’ character tells another that he has to go to the bathroom by saying, “I have to drain the main vein.” It’s overwritten without ever actually being clever.

I could forgive all of that if I cared at all about what The Best Man had to say, but I really, really didn’t. In general, it’s about a bunch of guys and a few girls hanging out with each other over a weekend because one of them, a star NFL running back played by Morris Chestnut, is getting married to his long-time girlfriend (Monica Calhoun). The “Best Man” of the title is an author played by Taye Diggs (you can tell he’s supposed to be smart because he wears glasses). His first novel has just been selected for Oprah’s book club, even though it appears to just be a very thinly veiled recounting of his and his friends’ love lives in college. He has a great girlfriend (or, I mean, she’s played by Sanaa Lathan, so I assume she is), but for reasons that neither he nor I nor the movie itself ever seem to understand, doesn’t want to commit to her despite the anvils she drops about wanting to get married.

Eventually Chestnut’s football star figures out that back in college his fiancee slept with Diggs’ author once (from reading his only lightly fictionalized novel), dangles him off a balcony, and drunkenly announces the wedding’s off. This also ends up spoiling Diggs’ plans to sleep with another old friend (Nia Long), who keeps telling him how she “hasn’t gotten any in six months” and is feeling “emotional and horny.” They were going to sleep together in college but didn’t because his Stevie Wonder CD kept skipping, which does not seem to me to be a big enough mood killer, but whatever. Anyway, in the end Diggs talks Chestnut into getting married again and at the reception proposes to Lathan, so it all works out for the best (?).

I guess what I don’t understand is, if you could make one movie after going through film school or whatever, and got a pretty great cast like this, why this is the movie you would make. The football player is incensed over the thought that his now-fiancée once slept with another guy many years earlier, even though he freely admits that he slept around all the time (he also says, and I couldn’t get through this without mentioning this, that he knows she is the one for him because “her pussy curves to my dick”). Diggs’ author is commitment-phobic for no discernible reason, a problem he gets over not through any effort of his own but because his old friend decides at the last minute not to sleep with him. A third friend, played by Harold Perrineau, is with an unremitting harpy of a girlfriend (Michelle De Sousa), who he eventually dumps on the steps of the church for a stripper he met at the bachelor party (Regina Hall, in her movie debut). Those are the character arcs. Oof.

Normally, when I’m not into a movie but it’s either popular or critics like it, I can see what they see in it, even if it’s not for me. But this one I don’t understand. It made back several times its small budget at the box office, and has a very good Rotten Tomatoes rating to this day. I mean, there’s a bit early on with Taye Diggs in a bathtub that made me question where I thought I was on the preference spectrum, I admit it, but I found several reviews saying they thought this movie was funny and I really don’t know what movie they saw. I only know its supposed to be a comedy because the descriptions say so. It’s less that I don’t find the jokes funny than that I can’t tell what the jokes are supposed to be. 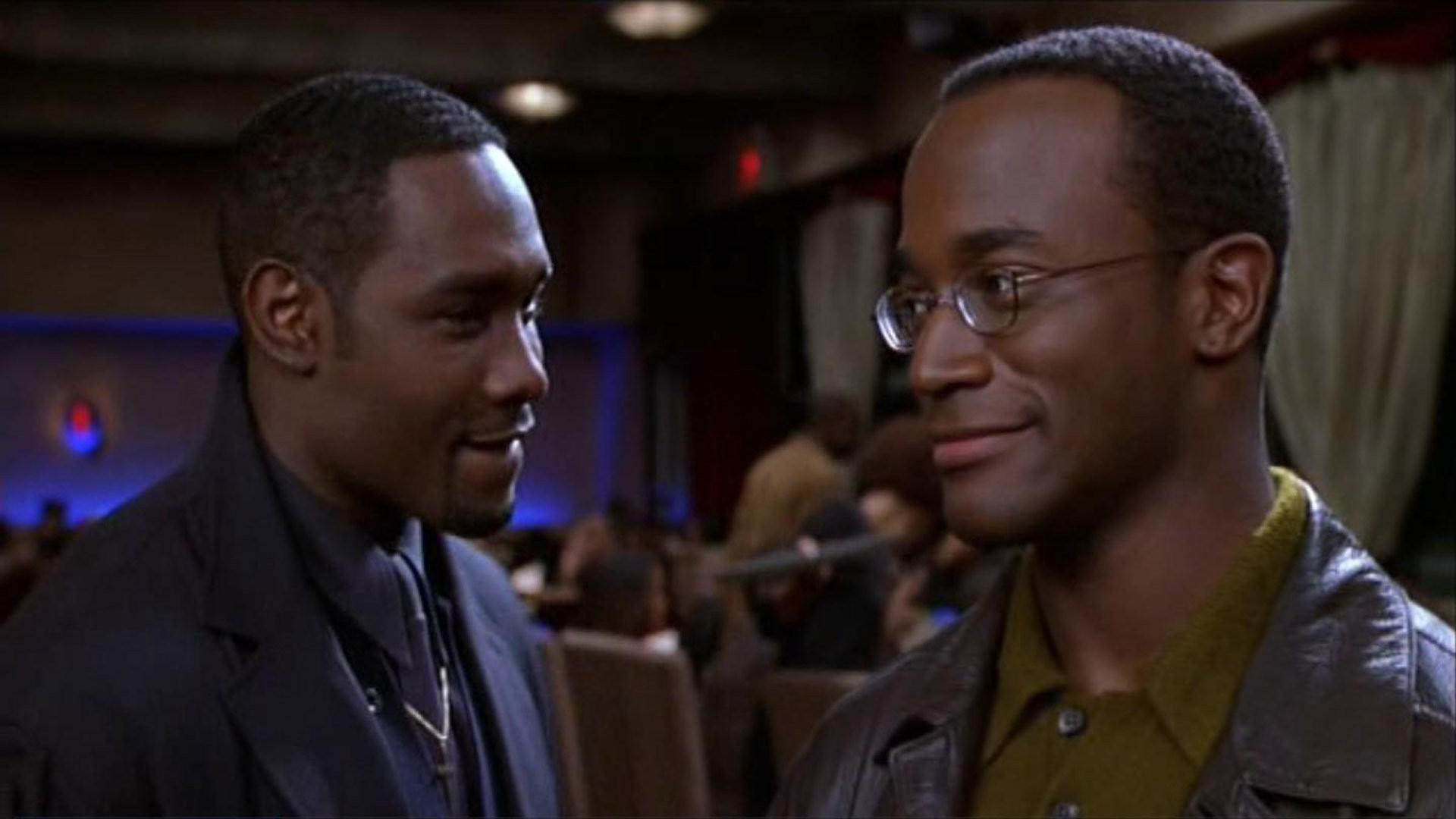 My favorite part of the movie is a young Terence Howard, who plays a fourth, vaguely cynical friend who doesn’t get much to do from a character perspective but makes every scene he’s in more fun with Howard’s big swing line readings. Even him talking Morris Chestnut into letting Taye Diggs come down from the balcony by telling him “God doesn’t want this” almost works. Almost. Though he’s the best, I actually really like most of the actors and what they’re doing, though I think the movie wants Diggs to be a sort of modern Cary Grant and he is not even close to up to it.

Really, this ensemble cast deserves way better. Chestnut, for example, is good in everything I’ve seen him in, but I keep seeing him cast as pro athletes. It’s a very weird typecasting that makes me wonder if we just can’t come up with more societal roles in which Black men can be successful. He plays an NFL star here, played an up-and-coming football star in Boyz N the Hood, and a cursory troll of his filmography found not only at least two other roles as a football player but another as a pro basketball player and another as a track star. Adding to the feeling that “pro football player” was chosen as little more than a type are the occasional lines about his football career, most of which are on the level of Calhoun’s fiancée character telling him, “you need to do a better job of using your offensive line.” Which is to say, they mostly seem to be written by someone who read a Wikipedia article about football without ever having watched an actual game.

Anyway, I don’t mean to pile on a smallish movie with an all-Black cast. But moreso than any movie we’ve covered since I started this blog, I really don’t get the appeal here. It even merited a sequel, which I have no plans to watch, called The Best Man Holiday. Writer/director Malcolm D. Lee, once he got his foot in the door, has kept up his career since the success of this movie. His later efforts include the well-liked and financially successful Girls Trip, along with lowlights like Undercover Brother and Scary Movie 5. His next movie, set for release (in theory) later this year, is the long-awaited sequel to Space Jam starring Lebron James. That I might check out.