Chungking Express was made in 1994, the same year as Pulp Fiction, and likely only received any US distribution because of its persistent promotion by that movie’s director, Quentin Tarantino. The DVD of this movie that I got from the local library has Tarantino’s name on the front, in bigger letters than the title. Though the two are very, very different movies, I can see how they might appeal to the same people. In fact, no one involved with this movie likely thought that it would be one of the very few Hong Kong movies still getting watched around the world a quarter century later. Wong Kar-Wai wrote and directed this movie on the fly during a break in shooting his much larger-budget martial arts movie, Ashes of Time. It would be Chungking Express that would be the break-out hit, to everyone’s surprise, and establish Wong’s worldwide reputation.

As a movie, it’s very hard to categorize, not least because it tells two entirely separate stories, seemingly connected by only a similar setting and themes. Wikipedia has settled on calling it a “romantic crime comedy–drama,” which I suppose is inclusive if not particularly definitive. I would say it is a romance, if anything, but not one where either of the two main couples ever actually get together or even kiss. It works on a level of deep sentimentality, almost beyond logic (or as one reviewer put it, “any movie in which an adult man talks to his own dish towel is having a little too much fun”). Also a drug dealer gets shot in an alley at one point. Really, the biggest thing a lot of people are likely to take away from this is Wong’s almost effortless visual virtuosity. The movie is a string of one memorable image after another, yet it never seems mannered. 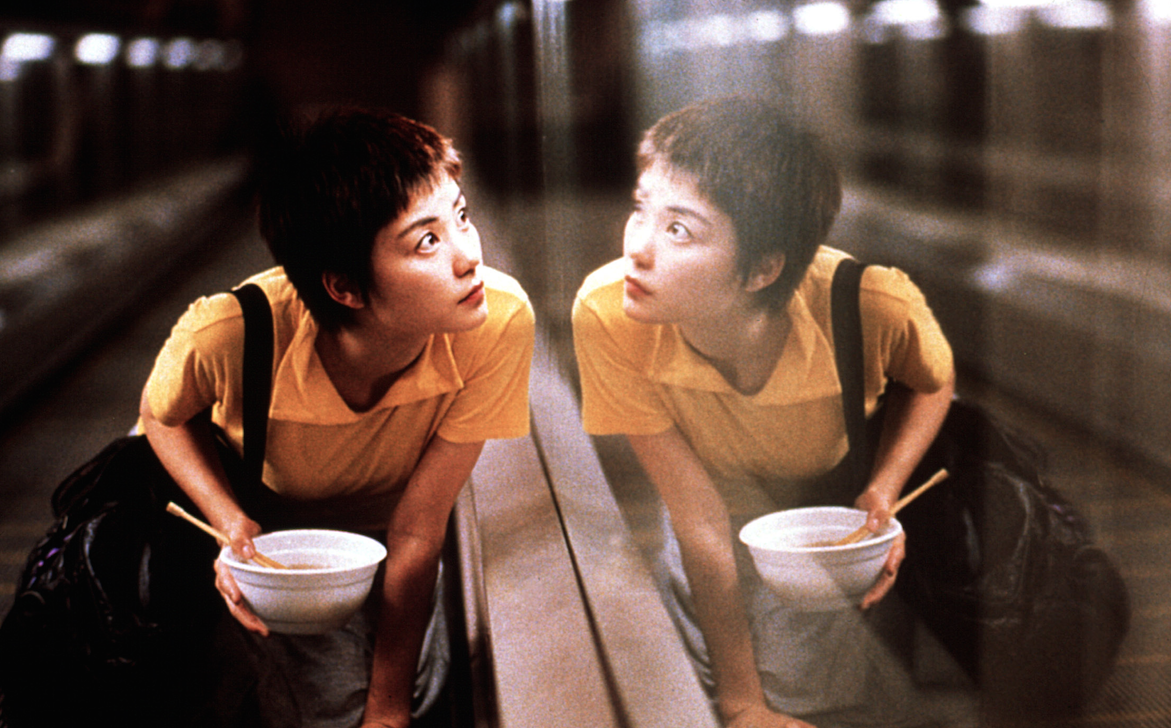 This is made more impressive by the fact that the movie was shot on a shoestring in a month. Asked why the two male romantic leads were police officers, Wong replied that he only got his movie studio in Hong Kong to finance the movie by telling them it was a movie about “some cops and a shooting,” and making it technically true. There wasn’t thought to be a domestic market there for a locally-produced, artsy, “romantic” movie. The filming was so run-and-gun that the apartment of Tony Leung’s character, scene of many scenes in the movie’s second story, was actually the apartment of Wong’s long-time cinematographer, Christopher Doyle. It just happened to be in that location overlooking the escalator, out of which the movie gets a lot of mileage. What Doyle apparently did not realize is that Wong was planning to flood his apartment. This sequence actually destroyed many of Doyle’s possessions and ended up leaking into the apartment below, the residents of which sued the production. Doyle would later state that it was “worth it” because of the many “cute Japanese girls” who would show up at his apartment because they were such fans of this movie.

What the two stories have in common is the Midnight Express food stand in the Chungking Gardens building in Hong Kong (hence the title), a real place you can still visit, like Christopher Doyle’s apartment. The first half of the movie tells the story of the brief connection between a lovesick detective (Takeshi Kaneshiro) and a mysterious lady in a blonde wig who was set up during a drug smuggling operation (Brigitte Lin). You would think that her story sounds more interesting, but the movie is more interested in him. He buys a can of pineapple, his old girlfriend’s favorite food, with an expiration date of one month from their break-up, every day. He gets in multiple fights with confused grocery clerks. He calls distant members of his girlfriend’s family, insisting he’s calling for them and not her. He calls up women he hasn’t known for years, trying to ask them out (including his 4th grade classmate who forgot he existed). Eventually, in a very cheesy dive bar playing the sort of sleazy saxophone music that we now imagine played in Film Noirs but didn’t actually, he narrates that he will fall in love with the first woman who walks through the door. That happens to be Wig Lady.

The second story is also about a police officer getting over a breakup (Tony Leung), and his weird relationship with a girl who works at the food stand (Faye Wong). She becomes weirdly obsessed with him after she ends up with a key to his apartment. She keeps going there when she assumes he’ll be out and “accidentally” running into him in the market. She does things like cleaning his apartment and replacing his old soap with new soap. In the Unspooled podcast episode on this movie, they debate whether she’s a “gremlin stalker” or “break-up elf.” Eventually he figures it out, but… doesn’t seem to mind? Then she leaves to become a stewardess (like his ex-girlfriend), and they never actually get together (the last scene is ambiguous, I suppose).

The cast and performances are universally great. Despite her weird actions, not least of which is her blaring “California Dreamin’” by the Mamas and the Papas over and over during the second half of the movie, I find myself a little bit in love with Faye Wong’s capricious girl with a pixie-cut. Between Faye Wong here, Shirley MacLaine in The Apartment, Audrey Hepburn in Roman Holiday, and sort of my own wife, I think I might have a type. Wong was actually on her way up at the time as a music superstar in Hong Kong and China, and remains a superstar to this day. Despite this, she is almost entirely known in the West for a couple of roles in Wong Kar-Wai films, along with, for another, different segment of the population, for singing the theme song for Final Fantasy VIII. Faye Wong can actually be heard on the movie’s soundtrack, that’s her singing the Cantonese cover of “Dreams” by the Cranberries that plays both during the movie and over the credits. That version of the track actually went on to be a big hit in Cantonese-speaking areas. Takeshi Kaneshiro, born to a Taiwanese mother and Okinawan father, was also primarily a singer, but you definitely wouldn’t know it from his performance here. 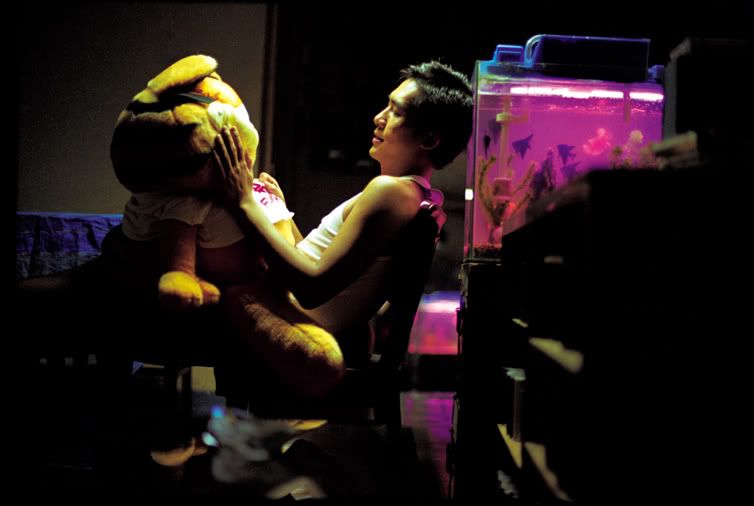 If there was a critique of Chungking Express at the time it came out, it would be that it felt “too MTV.” Most likely this is referring to bits like some of the chase early on, which Wong shoots in this sort of weird, blurry way that does sort of remind me of a Duran Duran video. But he finds a poetry in this technique i’m not sure anyone would have known was there as the movie goes on. In one sequence, he uses it as he shows each member of the second “couple” in pouring rain, through glass. It’s like looking at a moving impressionist painting.

Not ever actually having been to Hong Kong myself, I always imagine it the way it’s shown in Chungking Express. It is a maze of crowded, low-lit hallways, neon signs, and tiny, cramped rooms. Its characters break into several different languages without skipping a beat (Kaneshiro’s character alone delivers lines in Cantonese, Mandarin, Japanese, and English without a second thought). There seems to be at least one pouring rainstorm every day, and the characters always seem a little bit sweaty. This movie was produced only three years prior to the “handover” of Hong Kong from the UK to China. I don’t know if this Hong Kong still exists or not. But it will always live in this movie.