For some reason I decided to Google “What happens to Anna in L’Avventura?” Not because I thought there was an actual answer, that is sort of the point of the whole thing. I just wondered what theories other people might have. The featured result reads as follows: “In L’Avventura, events just happen; nothing signals them as significant. Anna does not actively disappear, she is just no longer on-screen, and neither the audience nor the other characters are aware of her not being present.” OK then.

L’Avventura (“The Adventure,” though unlike some other films it’s always referred to by its Italian title) is known as a movie where literally nothing happens, and as such was considered sort of revolutionary when it came out. Describing it, it sounds like there’s a mystery at the middle of it, but the mystery is very decidedly not the point, and in the end it is uninterested in having a resolution. What is the point? That’s up to you, I suppose. It is the kind of thing that drives some viewers completely nuts. The film caused a sensation on its debut at Cannes, with the screening apparently subject to boos and widespread derision, yet the next day a bunch of respected film people signed a note saying they thought it was the best movie they’d seen that year, and it won the Grand Jury Prize. 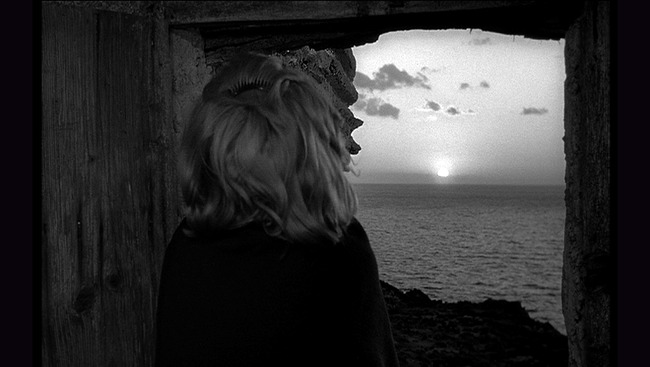 Our main characters are Anna (Lea Massari), her boyfriend Sandro (Gabriele Ferzetti), and her friend Claudia (Monica Vitti). They get together with a bunch of other rich people for a boat trip around some islands of Sicily. At one point Anna yells that there’s a shark, and everyone gets out of the water. She later confesses to Claudia there was no shark. They stop at one rocky, barren island. Sandro and Anna sort of have a fight. Then at some point someone realizes no one can find Anna. Their search seems more annoyed than frantic. Some of the people leave. At one point Anna’s father shows up. They end up back in Palermo, where Sandro goes through the motions of looking for Anna.

It is less a spoiler than the entire point of the movie that Anna never does reappear. They see a boat in the distance. Is she on the boat? Did Sandro do something to her? A very short time after it becomes apparent that Anna’s not about to reappear, he kisses Claudia suddenly. She seems more surprised than anything. The two of them seem to fall in love. She pulls away from a kiss, thinking Anna is behind her. Later, she runs through a hotel, believing somehow that Anna is there. Instead she finds Sandro making out with a prostitute and runs off to the roof.

I could make a bunch of guesses as to how all this connects to the themes, or what was meant by them. I think L’Avventura is more about what you see in it than what it actually tells you. I find it interesting, but it doesn’t always grab me. Once you see it once, I’d almost say it’s one of those movies to watch shot analyses of or read essays on, instead of re-watching. That’s a thing, right?

This is the film that made the reputation of director Michelangelo Antonioni, one of the great iconoclasts of film history. He has been called the “first true modernist” among directors, one of those who realized that the sorts of things you could do with films were different from the sorts of things you could do in, say, novels. It was also the first of what Wikipedia calls his “Trilogy of Modernity and its Discontents,” along with La Notte and L’Eclisse, both of which we’re likely to come to at some point. He also directed a few movies in English, including 1966’s Blow-Up, which is still considered something of a landmark. 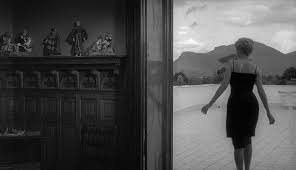 Unlike many other “great directors” of world cinema, Antonioni’s films are not universally beloved even in cinema circles. Kurosawa and Kubrick listed his films among their favorites, but Bergman basically said he didn’t see what the big deal was, while Orson Welles derided Antonioni’s famously long, “boring” takes. “He gives you a full shot of somebody walking down a road. And you think, ‘well, he’s not going to carry the woman all the way up that road.’ But he does. And then she leaves and you go on looking at the road after she’s gone.” I think I have a greater tolerance for that sort of thing than Welles had, and more often, Antonioni’s shots are more interesting than what he describes. Instead of doing shots over his characters’ shoulders during conversations, they turn to the camera, turn away, walk behind each other. There are more shots of the back of people’s heads in this movie than almost any other I’ve seen. The scene of Anna telling Claudia she lied about the shark is entirely on the back of their two heads.

So, should you watch L’Avventura? I have no idea. If you’re a “cineaste,” or wish you were one, you’ll probably come to it eventually. I do think you should know going in that this is not a story, not in the sense of your average blockbuster or novel. Nobody involved in this film would ever refer to it as a “movie.” Take from that what you will.