We have decided to start a new feature here on Movie Valhalla that will hopefully be fun for both me and our readers. Our usual rules on here are that we only review movies that are 20 years old or more. There are a bunch of reasons I decided to do that. One, I think there are plenty of actual professional writers already reviewing first-run movies. I find it hard to believe that anyone would want to read my takes when there are articles this week on a movie from your local paper, the A.V. Club, Vulture, et al. I also find the idea of coming back and re-evaluating things from a more removed perspective sometimes more interesting than just keeping up with the zeitgeist. Finally, I think that people are more likely to know about new movies they might like, because they’re seeing lots of advertising and discussion about them, than they are movies from a few decades ago, but we are living in a time where the over-a-century of film history is more accessible to the average person than ever, and there’s probably plenty of things a lot of people would love that they’ve never been exposed to. I know that has definitely been true for me, as I have absolutely loved a bunch of movies I’ve watched for this site that I would never have picked out otherwise.

All of that said, I still, y’know, do like to watch new movies and keep up with what’s going on, and I like to think about them, hopefully on a level beyond “well, that was pretty good.” At the same time, people I know ask me a lot about whether I’ve seen various current movies because they know I do this site and apparently think of me as “the movie guy,” and sometimes I have. In that vein I’ve been posting quick paragraphs on movies I’ve seen on Facebook, and it seemed like I should find some way to tie that in to the site.

In any case, the idea is to bring this site (occasionally) well and truly in the 21st Century with our new feature, “New Movie Time Capsule,” where we will on an occasional basis feature short “capsule” thoughts on movies currently in theaters or available on streaming. On this site, we often come back to movies decades after they came out and look at how perceptions of them might have changed. I’m hoping with these “time capsules” to be on the opposite end of that process, so to speak, and leave something for people to find decades down the line when they want to take a look at these movies and see what one person thought about them at the time. So let us know what you think, it’s just something we’re trying. 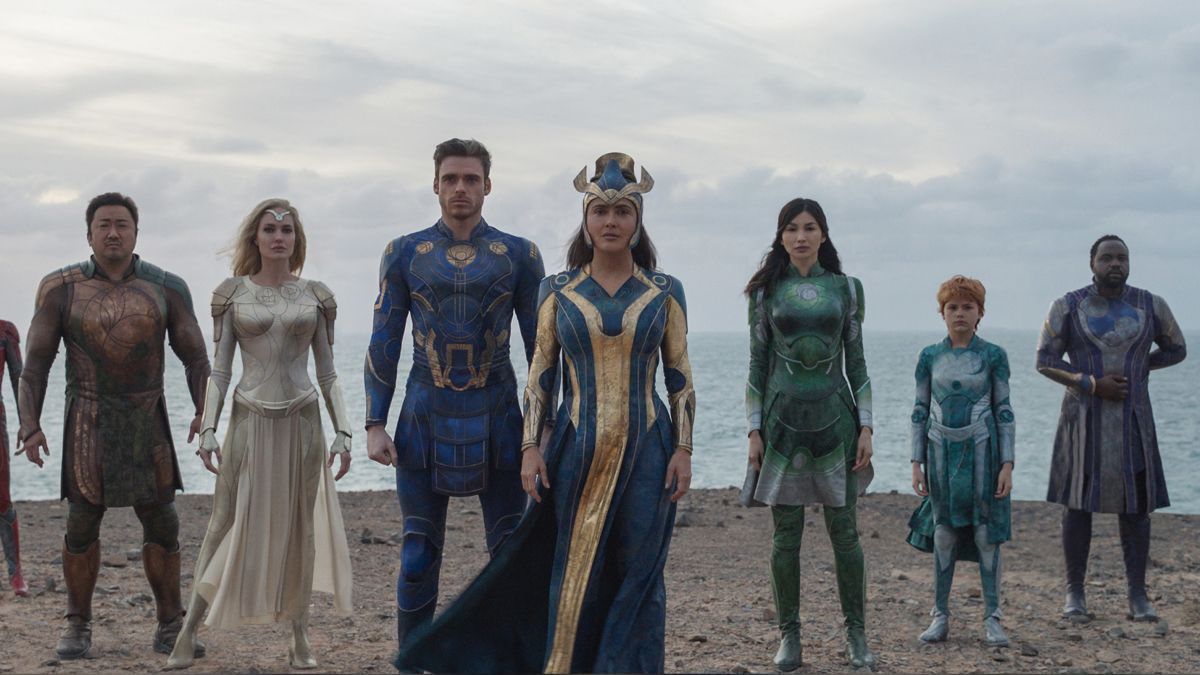 Expectations were high for a mega-budget superhero blockbuster from a director, Chloe Zhao, whose last movie, Nomadland, just won Best Picture and Best Director Oscars, but… I have seen all 27 Marvel Cinematic Universe movies to date, and I seriously think this might be the biggest misfire. It never really overcomes the fact that sticking these characters (a bunch of god-like immortal aliens, each with their own powers, who have been on Earth since the beginning of humankind but were forbidden from interfering in any of the literally universe-shaking events up until this one random thing) into the MCU was just never a good idea. There are too many Eternals (ten in total) and the movie just doesn’t manage them very well. Kumail Nanjani’s character is in the movie for most of it and then completely peaces out before the finale, while Brian Tyree Henry’s character is not in most of the movie and then the climax acts like he’s been super-important this whole time.  This is somehow a movie that completely wastes both Salma Hayek and Angelina Jolie.

Zhao seems more interested in shooting sunsets than action sequences, and honestly who can blame her because she’s very good at it, but unfortunately this movie is two and a half hours long and way too much of it is muddy CGI action. Gemma Chan’s Sersi ends up as probably the closest thing to a main character, which is refreshing in a superhero universe still dominated by white dudes, but the movie doesn’t quite succeed in making her character (or really most of the characters) interesting or giving her a personality. She does get to make out with not one but two hot Stark brothers from Game of Thrones (Richard Madden and Kit Harington) so I doubt she would complain. Then the movie spends a bit setting up a sequel that looks more interesting but probably won’t happen given this movie’s disappointing box office.

This does not seem like something I would usually go for, but I ended up finding it really fascinating. Olivia Colman plays Leda, a middle-aged philosophy professor (from an American college, though she’s just doing her usual accent) who goes on an extended summer “working holiday” on a Greek island. There she meets a younger American mother (Dakota Johnson of Fifty Shades fame) of a 3-year-old, who Leda returns to her mother after she briefly wanders off on the beach and everyone panics. This reminds Leda of her own life as a mother of two daughters, and we see a series of flashbacks of a younger Leda (Jessie Buckley) struggling badly with being a mother to two young girls of her own. This sounds like fairly bland drama, but there’s something in the presentation and in the performances, and the fact that we see Leda in particular not acting like mother’s are generally supposed to, that lends itself to something else.

I have heard it described as a “horror movie,” but what those people mean is that there’s something in the feeling it evokes, rather than anything that actually happens, that gets to the same emotional place as some horror movies. There’s a big reveal near the end that, thankfully, not that Leda lost her own daughter or something obvious like that, but in my opinion is much more interesting. This is the directorial debut from actress Maggie Gyllenhaal and has gotten enough attention that hopefully we will see more interesting things from her.

THE POWER OF THE DOG

I thought I’d check this one out because it was free on Netflix and is currently considered probably one of three or four main Oscar frontrunners, plus it is writer/director Jane Campion’s first feature film (she did two TV mini-series) in 13 years. I’m not going to sit here and say other people are wrong for enjoying this movie, because they’re not wrong at all, but oh boy is this not for me. Kirsten Dunst plays a widow who is courted and married in 1920s Montana by an awkward local rancher (Jesse Plemons), only to find both her and her fish-out-of-water son (played by Kodi Smit-McPhee, he likes to make intricate paper flowers and wants to go to college) constantly bullied by the rancher’s brother and partner, played by Benedict Cumberbatch (doing an only semi-convincing gruff American accent). Then Cumberbatch seems to take a liking to Smit-McPhee, much to Dunst’s chagrin, and things get a bit stranger.

This starts out as a sort of revisionist western that is very clearly about what we would call “toxic masculinity” and then looks underneath and finds that it might be there to cover up homoeroticism. There are many starkly beautiful vistas, with Campion’s native New Zealand standing in for Montana. The thing is, I am the guy who used to mute episodes of The Office when things got a little awkward. There are long stretches of this movie that are just Benedict Cumberbatch being a huge asshole while everyone around him sort of shifts around awkwardly, and unlike The Office there’s not a bunch of funny stuff around that to get me to forgive the crawling skin.

THE TRAGEDY OF MACBETH

The first true solo movie from only one of the two Coen Brothers stars Denzel Washington and Frances McDormand as a slightly-older-than-usual version of Shakespeare’s doomed power couple. If you’ve seen or read Macbeth, you know approximately what to expect, but what really fascinated me here was the presentation. The film is in entirely in black-and-white, in an old-school boxy aspect ratio. Coen also chose to shoot entire on stylized sound-stages, which combined with the black-and-white and off-beat camera angle choices leads to the movie feeling very heavily-reminiscent of Fritz Lang-style German Expressionism, while the artificiality of the outdoor scenes reminded me of Night of the Hunter. In any case, if you’re ever up Shakespeare movies, this is a really interesting one.