The all-time most famous directors have a bunch of candidates to choose from when one is selecting one’s favorite of their films. Hitchcock, Bergman, Kurosawa, Spielberg, etc., all have plenty of candidates. Federico Fellini is certainly one of these. La Dolce Vita, 8 ½, Amarcord, and several others all might win a critic’s poll for the best Fellini film, depending on the makeup of the voting body, and all for different reasons. But Fellini’s personal favorite was La Strada, which came earlier than all of those others, and he described as “a complete catalogue of my entire mythological world.” He’s not alone in this assessment: Roger Ebert said it was his favorite Fellini, period, and none other than Pope Francis has named La Strada as his all-time favorite movie. Or, I mean, it’s a sad drama about circus performers, from another perspective.

The title literally means The Road, but is always given in its native Italian. The story follows young, sweet, and naive Gelsomina (Giulietta Masina), who in the movie’s opening scene is sold by her destitute mother to a traveling strongman named Zampano (Anthony Quinn). His previous assistant was Gelsomina’s older sister Rosa, we learn, but she died. Zampano doesn’t want to talk about it. She goes along with him in his wagon (pulled by a motorcycle) to various traveling shows and putting on street performances. He is mean to her (he’s basically mean to everybody) and  it’s fairly clear that he takes advantage of her sexually, too. But she learns to play the trumpet and snare drum, and eventually we see her doing these elaborate pantomime routines as part of his act. 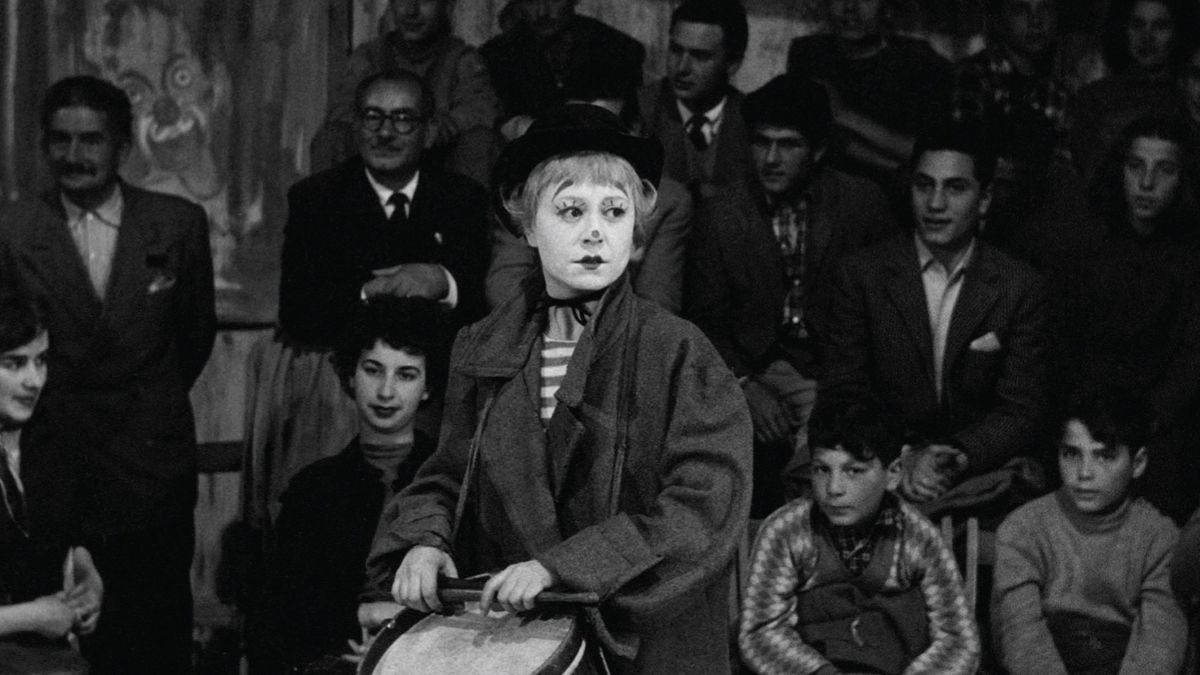 At one point he leaves her behind, at another point she runs off, but they always end up back together. Eventually they take a more permanent job at a traveling circus, where Gelsomina starts spending time with another performer, the Fool (Richard Basehart), to Zampano’s extreme displeasure. They are all fired from the circus after Zampano goes after the Fool with a knife. Later, they come upon the Fool changing his tire at the side of an empty road, and he and Zampano start fighting again. The Fool just can’t bring himself to stop making fun of Zampano, even with his life in danger, and Zampano does in fact beat him to death.

This seems to be the key moment of the film, and Gelsomina goes almost catatonic and is useless in the act. Zampano is worried that she will cost him money and leaves her at the side of the road while she sleeps, leaving her clothes, blankets, and some money. Cut to years later, when Zampano hears a woman humming the same song Gelsomina used to play on her trumpet. She tells him her father found a woman on the beach who lived there a while before she “wasted away and died.” Zampano gets drunk, gets in a fight with some locals at a bar, and ends up crying on the beach, the first time we’ve seen his tough exterior break down through the whole movie. 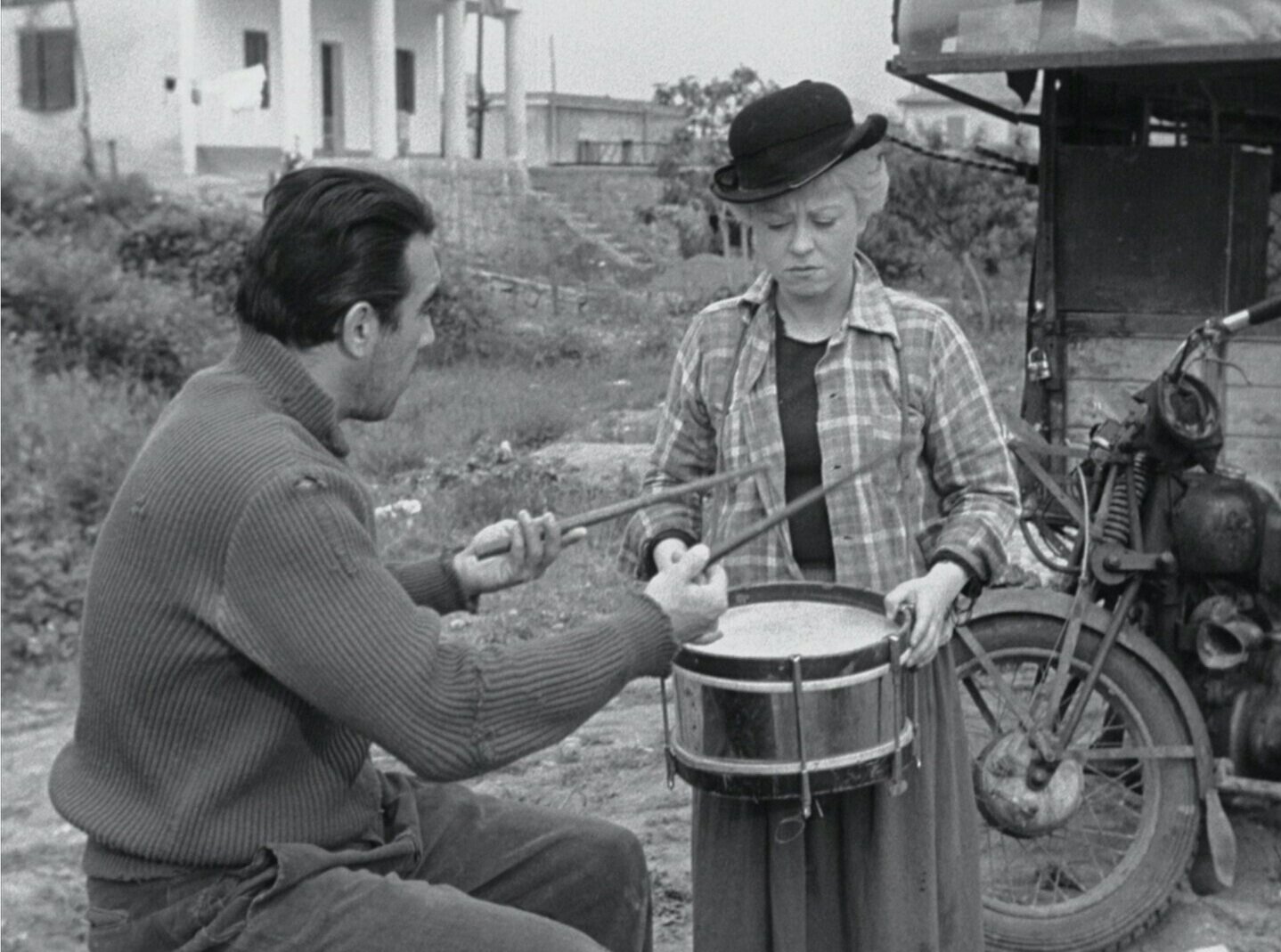 The plot of La Strada seems unrelentingly bleak, but it isn’t that kind of thing while you’re watching it, really. Much of this is down to Guilietta Masina’s performance as Gelsomina, which has become one of those legendary roles in cinema circles. She has this impossibly round face and wide eyes that, for much of the movie, are heavily accentuated with circus makeup. In some ways, Fellini apparently based Gelsomina’s character on things he saw in Masina (the two were married at the time), but in this role (in which she sometimes wears this little bowler hat) she feels like nothing so much as the female equivalent of Charlie Chaplin. This similarity has been much remarked upon over the years.

Roger Ebert would write decades later that, for the rest of her career, Masina would basically play versions of Gelsomina, so identified would she become with the role. I don’t think I agree with Ebert about Gelsomina herself, actually. He assumes that she is obviously meant to be mentally disabled. No “normal” person, he seems to think, could be as innocent and, for much of the movie, seemingly impervious to a long series of wrongs, as she is. I don’t think so, and I think that the internet film world of 2022 agrees with me. Fundamentally, it goes back to that “mythology” thing Fellini was talking about. These characters aren’t necessarily people, they’re embodiments of archetypes. It may be true that no human with all her faculties would act the way Gelsomina does, but she’s not meant to be a fully formed human character, and neither is anybody else in this movie. 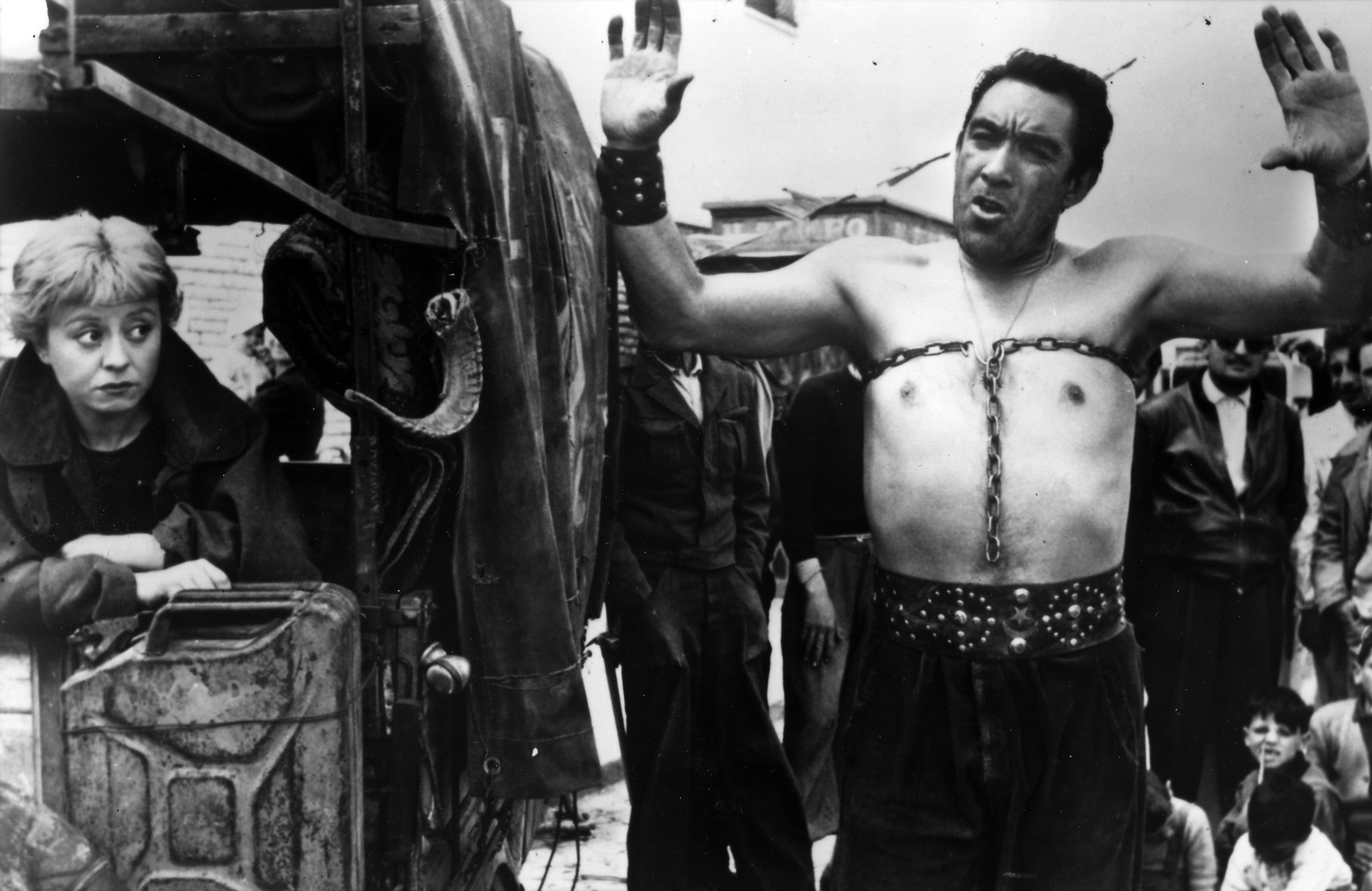 La Strada has the feel of great 20th Century literature, not so different in its own way from a Steinbeck novel, and in fact the first producer Fellini showed the script to broke down in tears and said it would make a classic novel but, as a movie, “wouldn’t make a lira.” That guy was very wrong, it turns out, and the movie was not only successful domestically in Italy but made the rounds for years on the international “art house” circuit, even winning the very first official Oscar in the Best Foreign Language Film category. That said, I do think that how you end up relating to La Strada, whether it’s deeply moving or feels like homework, is going to be determined in large part by what you as a viewer bring to it. Firstly, you’re going to need a pretty high tolerance for the general circus performer thing (I do not have this). Beyond this, you need to be able to go with the movie to its weepier places without bringing your cynicism with you. Despite the downer ending, this isn’t meant to be unrelentingly dark. La Strada is a tragedy, but it’s a tragedy caused by characters loving each other but not realizing it.

Other than Masina, Fellini took the interesting step of casting the two other lead roles of Zampano and the Fool with semi-established American movie stars, Anthony Quinn and Richard Basehart. This practice has ebbed and flowed in popularity over the decades. As was standard practice in Italian movies of the time, no sound was recorded on set, and in fact the two American actors delivered their lines in English while Masina delivered hers in Italian. In order to act off of each other, Fellini had the actors mentally count off numbers during dialogue so they would know how to react to the other’s lines. To facilitate this, he always played music on set, which some critics have since claimed gives all of the people in Fellini films a sort of “dancing” quality to their acting.

Look, I cannot deny that, from a technical standpoint, La Strada, like all Fellini movies I’ve seen, is stunning. The movie creates beautiful visuals out of seemingly nothing but a crappy wagon and some morning light, and it floats in and out of diagetic and non-diagetic music to beautiful effect. It sometimes feels like we’re watching someone’s wistful memories of some crappy times, rather than watching the crappy times themselves. But on the other hand, La Strada seems almost specifically calculated to leave me personally a bit cold, and try as I might I think in the end it does. It is one of those takes that makes me feel like a cold-hearted jerk, but give me 8 ½ any day.