The first paragraph of Roger Corman’s Wikipedia page calls him “the Pope of Pop Cinema.” James Cameron said in his DVD Commentary for The Terminator that he “studied at the Roger Corman film school.” Corman gave Francis Ford Coppola, Martin Scorsese, and Jonathan Demme their first directing jobs on independent movies he produced. And yet, even people who consider themselves film fans are probably more likely than not to never have seen one of his films. I figured that The Masque of the Red Death, about a rich dude living it up and torturing the peasants while they all die of the plague, wasn’t a bad place to check in these days.

After House of Usher was a surprise hit in 1960, Corman and Vincent Price teamed up on six more Edgar Allen Poe adaptations over the next handful of years. Maybe the best known today is The Masque of the Red Death, though it was less of a financial hit at the time than some of the others in the series, a fact that one producer attributed, and I quote, to the movie being “too artsy fartsy.” But that fartsiness, as expressed in saturated color cinematography by Nicolas Roeg (a future director himself, whose hits included Don’t Look Now and The Man Who Fell to Earth), may be the reason the movie can still be fairly easily found today. It has even made its way into the popular book 1,001 Movies You Must See Before You Die. 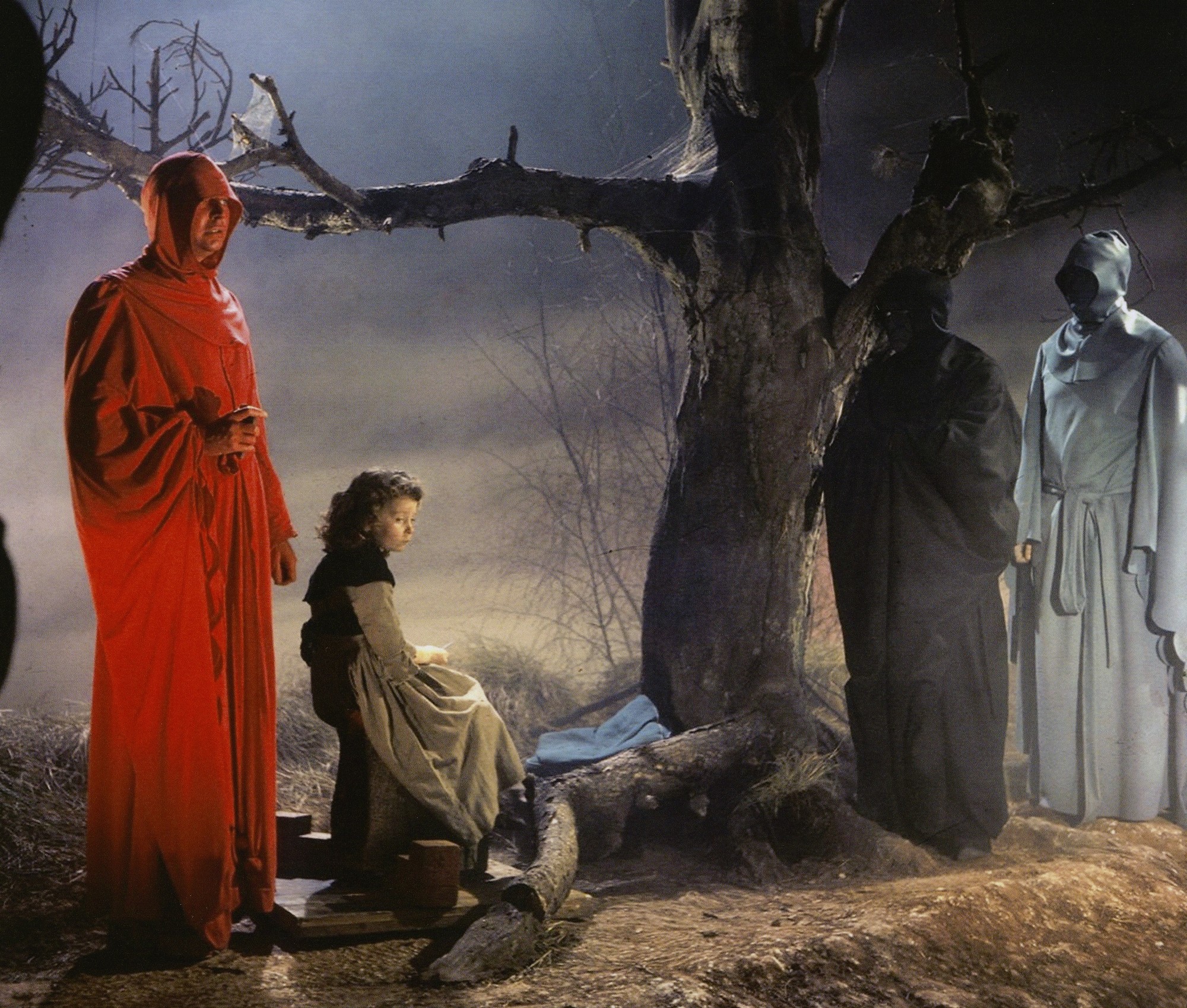 Price stars as Prince Prospero, an Italian aristocrat who tortures the peasants for fun and not-particularly-secretly worships Satan. In the first scene, he visits a village and discovers that “the Red Death,” a plague that the movie literally thinks means “turns red and dies,” has taken hold. He retreats to his castle, to which he invites various members of the nobility to party with him while the people outside die. He takes with him a peasant girl (Jane Asher) who catches his attention, he says because of the “innocence in her eyes.” He brings her back to the castle and dresses her up like a princess, while also taking her boyfriend and father prisoner, planning to force them to fight to the death. As you’ll recall if you’ve read the famous Poe story (I recall being assigned it in English class at some point), you know that this does not end well for him. The movie’s final sequence, in which Death shows up at a masked ball at midnight on the Sabbath, plays like a bad dream you’d have while on drugs. Literally at one point Vincent Price and all the other actors just start moving in slow motion. Corman didn’t slow the film down, or anything like that, he’s literally having the actors act like they’re moving super slowly.

The Masque of the Red Death, and all of the other Corman/Price/Poe movies, was generally classified at the time as a horror movie, but it’s not really, in the modern sense, for all that the various characters talk about “understanding the thrill of terror” and things like that. It’s a movie about a character without a moral compass, but there’s basically no gore whatsoever. Instead, the “horror” comes more out of the movie’s worldview. Prince Prospero tells the “innocent” Francesca that God is dead. Satan killed him. What other possible explanation could there be for the state of the world, that people like him have total power over people like her? And the movie never actually proves him wrong. It adds a final scene, not in the Poe story, in which the Red Death meets up with his death pals of various other colors, and they talk about how they take both the rich and the poor. The message of the movie isn’t that God’s not dead, it’s that we are all equally powerless before the terrors of the world. There’s no getting out of it because you have money or have made a deal.

Jane Asher’s character of Francesca is the closest thing to a moral light in the movie, with her long, red hair contrasting with the deeper red in Prospero’s satanic chapel. If you recognize her name, I’m willing to bet it was because she was Paul McCartney’s live-in girlfriend for most of the mid-1960s, including during the filming of this movie. Several of his better known songs, including “And I Love Her,” “You Won’t See Me,” “I’m Looking Through You,” “We Can Work It Out,” and “Here, There and Everywhere” are thought to have been written about her. In 1968, she came back early from a vacation to find him in bed with another woman, and moved out by the end of the day. She later told tabloids that they had drifted apart well before, and even accused him of having hogged all the LSD for himself.

Corman had worked his way up the early 1950s studio ladder to the role of “story teacher,” the salary from which he saved to produce his own, independent science fiction movie, 1954’s Monster From the Ocean Floor. He went on to become one of the first really successful pioneers of “independent movies,” making mostly what we today would call “B movies” on the cheap. His titles included Bucket of Blood, The Beast With a Million Eyes, and Attack of the Crab Monsters. He hit the next level of financial success with his Poe movies, which could hold down a bill on their own and had slightly higher budgets. He used that to transition fully into producing, which allowed him to give many up and coming directors their big breaks. He produced many of what are now thought of as the “grindhouse” classics of the 1970s, like Death Race and Caged Heat. Many of the directors he hired paid him back with cameos in their bigger movies, which is how Roger Corman ended up playing the Director of the FBI in Silence of the Lambs and a Senator in The Godfather Part II. Late in his life, he transitioned to producing very low coast monster movies for the SyFy Channel. His later oeuvre includes Dinocroc vs. Supergator, Sharktopus, and Pirahnaconda. Not so different from how he started out.

The Masque of the Red Death is based on a short story, and doesn’t possess much in terms of a plot. It is almost entirely about the feel of the thing. There’s a blond lady, who I’m not sure has any lines, but Corman keeps cutting back to her while she gleefully scarfs down chicken and wine while Vincent Price has the villagers fight to death for her entertainment. Corman supposedly kept putting off filming this Poe story, despite it being his favorite, because he worried couldn’t do it justice, but he understands its point of view on an instinctual level. The results may be artsy fartsy, but honestly that’s why I was into it. Roger Corman knew exactly how to make a movie, how to communicate what he wanted, and he used that skill to make horror adaptations and monster movies. We need more like him.