Guess Who’s Coming to Dinner is certainly an important movie, but I’m a bit at a loss as to whether it’s a good one. By which I mean, not so much that I don’t like it, but more that it has a few too many things going on both in and around it for me to have wrapped my head around it yet. This is a movie that puts the issue of interracial marriage front and center, an issue Hollywood wouldn’t previously touch with a ten foot pole. It was only made because its director, Stanley Kramer, lined up a cast with so much star power that Columbia Pictures couldn’t say no, then didn’t really tell them what it was about until it was too late for the studio to do much about it. It hit theaters only about six months after the Supreme Court handed down its decision in the case of Loving v. Virginia, which legalized interracial marriage nationwide. Before that, including at the time this movie was being written and shot, “miscegenation” was still illegal in 17 states. The famous Star Trek kiss between Kirk and Uhura, credited with being the first interracial kiss on American television, didn’t happen until the next year.

Yet this is also a movie that feels incredibly old fashioned in its construction, in the way it’s put together. If Kramer could have convinced someone to finance it, he could have made this in 1935 and it wouldn’t really have changed much. It consists almost entirely of people sitting in rooms talking to each other. And it came out at pretty much the same time that the freedom European movies had been displaying pretty much since the end of World War II had finally really made an impact in Hollywood. Among Guess Who’s competitors for Best Picture that year were The Graduate and Bonnie and Clyde (all three lost to In the Heat of the Night). Kramer found, to his frustration, that college kids looked at his movie as if it were a dinosaur. But it was a big hit with their parents, who maybe were the people he needed to reach anyway. Would it be weird to say that Guess Who’s Coming to Dinner was the Green Book of its day? 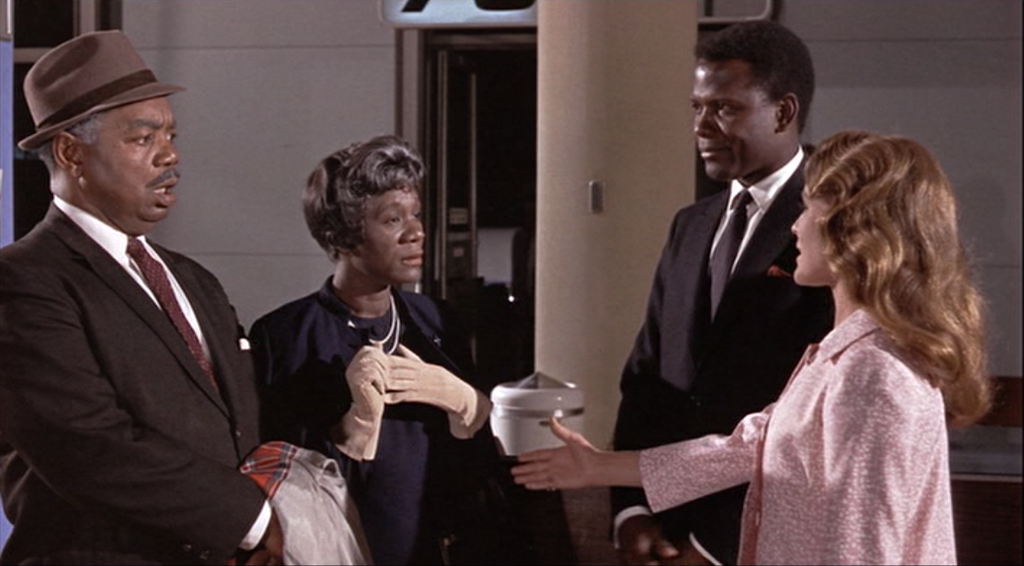 More than that, for all that its participants thought it was on the cutting edge of the culture, even at the time Guess Who’s was widely accused of not pushing things far enough. It is common to note that Dr. Prentice, played by Sidney Poitier, is a flawless character. Absolutely the only reason that his fiancee’s parents could object to him is that he is Black. This was on purpose, as the filmmakers wanted to hone in on the really universal, essential aspects of this issue. But many observers (the great Black writer James Baldwin, for one) felt that Poitier’s portrayal showed that, in order to be accepted into white society, he had to be a complete, unrealistic paragon. Poitier himself was still worried about showing that Black people were just as capable of becoming, for example, prominent doctors who parents would be proud to have their daughter marry, but in the late 60s the culture was moving very fast, and many people felt that we had moved further than that.

So what is this movie? Spencer Tracy and Katherine Hepburn (who starred in a total of 9 movies together over their careers) are an aging couple of rich liberals in San Francisco who are shocked to find that their darling daughter (Katherine Houghton, Hepburn’s real-life niece) has come home from Hawaii with a new fiance, or more specifically that said fiance is played by Sidney Poitier. The younger people are clearly very into each other (they do kiss, though the movie is more interested in them each making long, gooey speeches about how much they love each other), but the older people are thrown. They are liberal enough to feel bad about being thrown, but find that doesn’t mean they aren’t. Poitier’s character has a bit more life experience than Houghton’s, and a better idea of what he’s getting into. He says to her parents that if they don’t give him their blessing, he won’t marry her, because he doesn’t think that the couple can deal with everything else they’ll have to deal with without their support. Houghton, meanwhile, seems to be one of those young people who genuinely doesn’t understand what problem the older people could possibly have with any of this. I might point out that she doesn’t get any flaws, either. Just as Poitier is playing an archetype, so is she… she’s the fill-in for all the rich white people in the audience’s darling daughter, and not a lot else.

Things get a bit more complicated when Poitier’s parents, who only know that he’s met “a pretty girl,” invite themselves up from Los Angeles to meet her. His father (Roy E. Glenn, Sr.) is dead set that this is a terrible idea. Interestingly, so is the white family’s Black maid (Isabel Sanford, best known for her role on The Jeffersons), who really thinks that Poitier is “getting above himself.” The movie builds up suspense as dinner gets closer, as Spencer Tracy’s crotchety patriarch tells anyone who will listen that he thinks the marriage will never work. But at the end of the movie he gives a big speech about how love conquers all (I’m paraphrasing) and they all walk into the next room to have dinner.

Tracy and Hepburn had been living together for years at this point. Though he was still married to his actual wife, it was Hepburn who stuck around as his health deteriorated. Watching this movie, you would never know that Spencer Tracy was actually dying as he made it. There were even two versions of the script, one with and one without his character, in case he died in the middle of it. Apparently he and Hepburn agreed that it was better than having him just sit at home waiting. In fact, he passed away only two weeks after shooting ended. Tracy was called the best actor of his generation by other members of that generation that are probably more famous today, including Clark Gable and Humphrey Bogart, and won back to back Best Actor Oscars way back in 1937 and 1938. 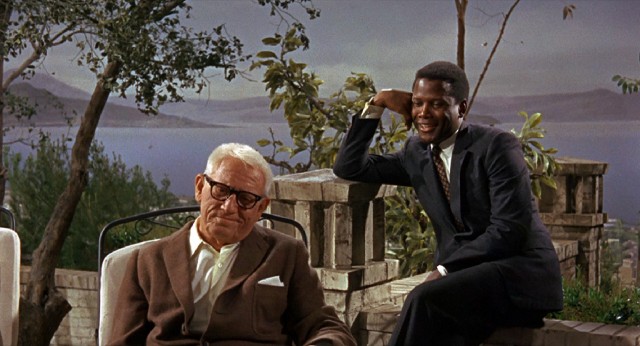 The reason I think I enjoyed Guess Who’s Coming to Dinner where, for example, Green Book falls flat for me, is the targets it chooses. This is not a movie where anybody’s blatantly racist to people’s faces. It’s about liberals finding out that principles are harder to live up to than they are to just say. It’s about Spencer Tracy insisting up and down that he “respects” Sidney Poitier, while at the same time arguing that he should marry his daughter because of how other people will react. I didn’t realize it at the time it came out, but Get Out is essentially a horror remake of this movie. Which would be one way to talk about the actual remake, titled just Guess Who, made in 2005 with the racial roles reversed, Bernie Mac as the skeptical Dad, and Ashton Kutcher as the shocking man the daughter brings home. It is the sort of movie that gives reaction shots to the dog.

A brief word here on the rest of the cast. Beah Richards received an Oscar nomination for her role as the mother of Sidney Poitier’s character. This turned out to be her best-known role, though she did appear as the local backroom abortionist in In the Heat of the Night with Poitier the same year. She gets her big Oscar clip with a speech late in the movie with a big, teary speech about the two fathers being so old they’ve forgotten what it feels like to be in love. Also Oscar nominated was veteran South African actor Cecil Kellaway, who plays a Catholic priest friend (with what I’m guessing is supposed to be an Irish accent?) of the girl’s parents, who is very supportive of the marriage. He finagles his own invitation to dinner, noting that “If I’m not there, you’ll be outnumbered by the Blacks!” Roy E. Glenn, playing Poitier’s character’s father, had also been in Hollywood for decades, during which time he saw a major change in the types of roles he could get. He literally started out playing “Uncle Tom” in a 1930s radio play, and went on to voice a Black stereotype of a frog in Song of the South, but stuck around long enough to get much meatier parts, including this movie and A Raisin in the Sun (also with Poitier).

The people who say that Sidney Poitier’s character is “too perfect” and the movie is too straight-forward, while still finding a way for an old straight white guy to explain to us at the end why prejudice is bad, are all right. But at the same time, at least some of those reasons are why this movie still works despite being of a very specific and fleeting cultural moment. It’s at least as much about the dynamics of intergenerational conflict as it is about racism or prejudice or any specific issue. Spencer Tracy’s character wouldn’t hesitate to, say, go a rally in support of interracial marriage, but when it’s his own daughter he feels the need to lecture about “hard truths.” That conflict is laid most bare, however, in the relationship between Poitier’s character and his father, a former mailman. The father says he worked hard all his life to provide Poitier with what he needed to get where he ends up, and that he shouldn’t throw it away on “something so stupid.” Poitier responds with this speech, which I feels like somebody could yell in a movie in 2020 and I was really not expecting to suddenly happen in a movie that, in many ways, felt old fashioned when it came out in 1967: