The great Sidney Poitier passed away on January 6 at the age of 94. We talked a bit about his life in our article on Guess Who’s Coming to Dinner? and In the Heat of the Night. Originally from the Bahamas (though he had dual American citizenship), he was basically the only Black star who was able to headline mainstream movies in Hollywood during his era, which turned into something of a crushing responsibility. For today’s feature, Lilies of the Field, he became the first Black actor to win an Oscar since Hattie McDaniel for Gone With the Wind, and the first ever in a leading role. Yet even after the award, he basically didn’t star in another movie for a year because he refused to take any of the more stereotypical roles he was offered. He went on to receive both the Presidential Medal of Freedom from Barack Obama and the Order of the British Empire from Queen Elizabeth II. In 2001, he received a second, Honorary Academy Award, and later in the same ceremony Denzel Washington would become only the second Black actor to win the Best Actor award. In Washington’s speech he commented to Poitier that “I will always be chasing you, sir.”

So, having watched those other movies, I thought I’d try Lilies of the Field, and… huh. I mean, Poitier’s great in it, sure, but it is all so restrained that it almost forgets to be a movie. Part of that is that this is all pretty definitely not my thing in general. But I mean, also this is all so weightless that, if there is dramatic tension, it’s from the movie threatening to just blow away, and eventually it does and then it’s over. From a one sentence description of the plot, it basically sounds like Sister Act, but if Sister Act is this concept at a ten, Lilies of the Field is about a two. 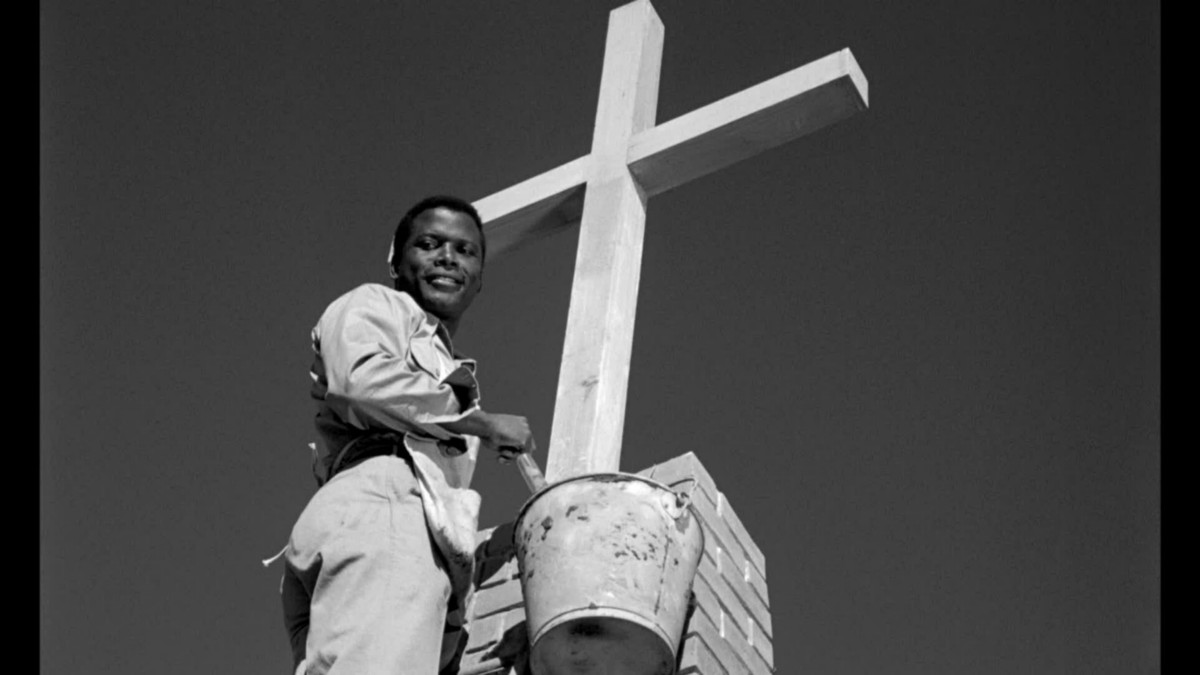 Poitier plays an itinerant worker named Homer Smith who pulls up to a dusty convent in the desert one day just looking for some water and gas. The nuns are all German, for reasons the movie feels no particular need to explain (I looked this up and I think the movie might be assuming that audiences would get that they probably fled communist East Germany). Seeing that Smith (or “Schmidt,” as the nuns insist on calling him) has a bag of tools with him, the head nun (Lilia Skala) decides he has been sent to them by God and manages to get him to stick around for a bit. Despite insisting that he is a Baptist and not a Catholic (this is the sort of movie where that is an important distinction), the Nuns get “Schmidt” to build them a chapel (they’ve been having Mass outside), while he teaches them English in the evenings. He also teaches them to sing a couple spirituals, because sure. Eventually the chapel gets built and then he leaves, the end.

It’ s interesting to note that there’s no particular reason why Poitier’s itinerant worker character would need to be Black, especially given that those roles just weren’t going to Black actors ever at this point. The movie does acknowledge his race a few times, both on its face and in subtler ways, but his relationship with the nuns has pretty much nothing to do with that. There is conflict in the sense that Smith doesn’t quite get the nuns, but he’s more quizzical about their differences than anything. The Mother Superior is inflexible, but in the end good hearted, and honestly that stays about the same all through the movie. There’s a runner about how she keeps thanking God for things Smith does, and in the end he basically tricks her into thanking him one time right before he leaves. Except that in the end what that means is she never really changed. His arc, I guess, is that he agrees at one point to accept help from some other parishioners rather than trying to finish the chapel himself, and sees that he can be more of an architect or foreman rather than just a construction worker.

But again, most of the scenes are just sort of Poitier doing normal guy stuff like going to the store, and then coming back to the convent and the nuns looking at him like he’s from Mars. It’s perfectly fine, but even tonally there’s no there there. Yet somehow this movie ended up massively critically acclaimed and nominated for not just Poitier’s award, but a bunch of other Oscars, including Best Picture. I felt like I was missing something here. Or maybe this is just that movie that mom who doesn’t actually like about 98% of movies when she says she wants a movie without actual conflict in it (sorry Mom, I’m having a day).

The title of the movie comes from a line from Christ’s Sermon on the Mount,” in which he says “Consider the lilies of the field, how they grow; they toil not, neither do they spin. And yet I say unto you that even Solomon in all his glory was not arrayed like one of these.” I’m not sure I quite get that one either. But because of Poitier’s win, this seemingly ephemeral little story has been immortalized enough that you can still find it easily all these years later.